From Pescasseroli to Campobasso 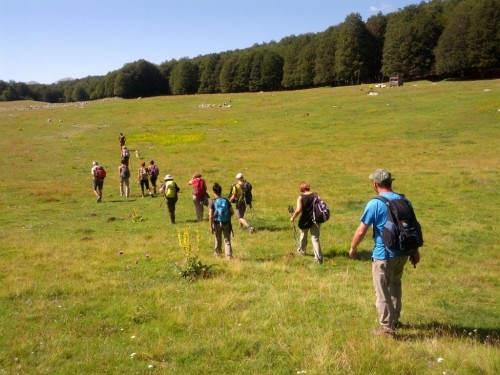 One hundred and twelve kilometers to discover the sheep tracks, the large grass roads, which connected the Abruzzo Apennines and the Apulian Tavoliere and were traveled by shepherds and their flocks.

Alfonso of Aragon in 1447 revitalized the roads on which the sheep moved and created a large trattural network, the regi tratturi, which had a well-defined width, sixty Neapolitan steps, corresponding to 121 yards. These include Pescasseroli – Candela and Castel di Sangro – Lucera. Our path follows a stretch of one and then a stretch of the other.

The route takes place on mountain paths in the first part and then on secondary dirt and asphalted roads with little traffic, in the center of the droveroad itself, which being state property cannot be built or sold. The Via del tratturo is a journey into the traditions, culture and religiosity of the Molise people who have always linked their lives to transhumant sheep farming. It is advisable to viadeltratturo.it/tracce-gps/">have GPS tracks, downloadable from the site for free .

We have chosen this first stretch from Pescasseroli to Campobasso to introduce you to the world of sheep tracks, and our first commitment will be to build a network of realities that help keep the path alive. If the project evolves positively, we will think about continuing the journey to Puglia, as per tradition.