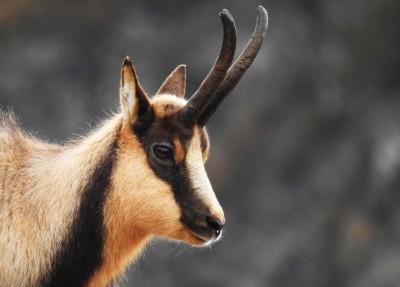 In nature can live about 15 years.

It prefers steeper and more rocky parts of the mountains, where it is the undisputed king and can more easily repel the attack of various predators. He lives above 1800 m s.l.m. Only in winter drops relative share of always settling on the more inaccessible mountains.

The average weight of the adult male chamois in weight is 30 kg and females 27 kg.

The chamois is a herbivore that prefers grazing in mountain meadows . Particularly important in your diet is the Festuco - Trifolietum thalii, a plant particularly rich in protein.

The chamois are organized into packs of females, in which are also allowed kids and young males. In contrast, adults are solitary life and cover distances greater than those traversed by herds of females.

Coincides with the season of autumn (late October-November), during which the males defend their harem of females. They will compete in agility trials with long and frantic chases serve to demonstrate that the health status of the contenders. In this occasion, the males emit a curious verse called the "spernacchio". A real fart used to challenge rivals and attract females . The female usually gives birth to one kid in the spring of presence.

The chamois is considered an ungulate, that is characterized by a hoof divided into two claws, whose shape unlike other ungulates is particularly elongated and adapted to a habitat so impervious . The droppings are similar to those of a goat . Also remember the hairs, which if they can find tufts during the changeover period. 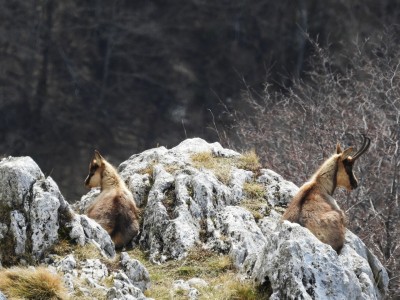 In the park is estimated a population of about 600-700 chamoises.

"World's most beautiful Chamois" Abruzzo Chamois is considered an endemic species. It differs visibly from his relative Alps. The most noticeable differences are: a more slender body, slim and elegant, horns longer and more hooked (especially in males), the color of the winter coat that has colors that range from light brown to reddish with black stripes that come down from the neck.

Re-entry: in the early twenties when the park was created there were only a few tens of chamois, exterminated by hunting. Thanks to the work of the Park this animal has grown in number and it was possible to re-introduce it on other mountains of Abruzzo and Marche (Gran Sasso, Majella, Sibillini, Velino) where it was completely extinguished.

Alarm: every herd of chamois is equipped with a guard, namely that one of them, while the others graze peacefully, is responsible for overseeing the safety of the group. In case of alarm emits a whistle with the nostrils.

Observe the chamois in the Park is not particularly difficult, just go to the places where they live: Rose Valley, Monte Amaro, Monte Meta, etc.. However, the climb can be especially hard because they live on top of the most inaccessible mountains. In addition, as in every other observation, we recommend the utmost respect for the animals.