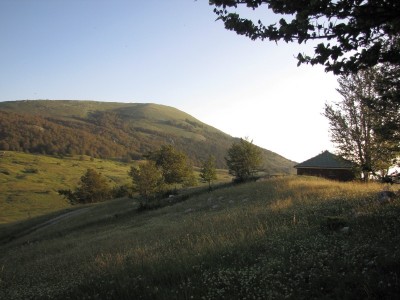 The Cicerana Refuge is a hut located at 1560 m above sea level, in the municipality of Lecce nei Marsi. Its location, in one of the wildest valleys of the Abruzzo National Park, makes it the ideal place to immerse yourself in nature. Its strategic location allows it to dominate the entire valley Cicerana that, far from human settlements, is enclosed between the peaks of Monte Turchio (1894 m) to the east, Monte di Valle Caprara (1998 m), Rocca Genovese (1944 m), Monte Marcolano (1940 m) to the south and Monte Prato Maiuri (1899 m) to the west. From the hut the view extends to the imposing mountains of the Regional Park Sirente - Velino. Cicerana valley, characterized by large clearings surrounded by vast forests of beech, is a historic place of passage for travelers, who traveled from Marsica to Alto Sangro and back. In the most hidden corner of this wonderful land still survives an ancient beech forests, as in Selva Moricento, where the patriarchs reach 500 years of life. In these primeval forests, the concentration of species is impressive. An intact ecosystem that contains an immense biodiversity. Selva Moricento, as well as other old-growth forests, has been given by the Park as a "World Heritage" by UNESCO. The characteristic karst environment of the area has favored the formation of numerous karst fields (Karren), sinkholes and caves, where ice is preserved all year long. In this valley still live rare species of animals like the Marsican brown bear (Ursus arctos marsicanus), the Apennine Wolf (Canis lupus lupus), the Lilford Woodpecker (Picoides leocotus lilfordi), the Rock Partridge (Alectoris graeca) and Rosalia Alpina. Despite this immense natural value Cicerana was in past decades the subject of an attempted speculation that, thanks to the intervention of the National Park, did not take place. Just from an ecologic conversion of a house is born Cicerana Refuge. 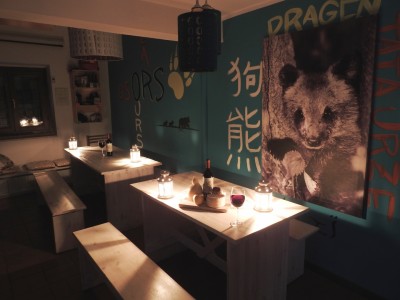 The characteristic cubic form of the structure makes it look much more like a small house than a hut. The hut has a kitchen, 15 comfortable beds, a bathroom, and a large room equipped with a stove / fireplace, where you can dine and enjoy the characteristic atmosphere of the hut.

The hut is completely independent and is also equipped with non-potable water, electricity and heating (gas + wood). The Ecorifugio is about an hour walk from Passo del Diavolo, the pass along the road linking Pescasseroli to Marsica. Cicerana’s Ecorifugio is accessible through the path T1 and T5 of the National Park of Abruzzo, is about 4 km from the Passo del Diavolo for a total difference in altitude of 160 m.

An easy hike to come in one of the most beautiful valleys of the Park. In Abruzzo National Park, Cicerana’s Ecorifugio is the first attempt of management of a hut in the Alpine manner. It is usable as part of the activities organized by Ecotur, but not only, is also available to those who had independently decided to have lunch, dinner or sleep at the hut itself. Cicerana’s Ecorifugio is always open during the summer, while during the autumn / winter / spring is always wise to call (+39 0863 912760) to verify the opening. It is advisable also to reserve for those who, even in the summer wanted to stay overnight. 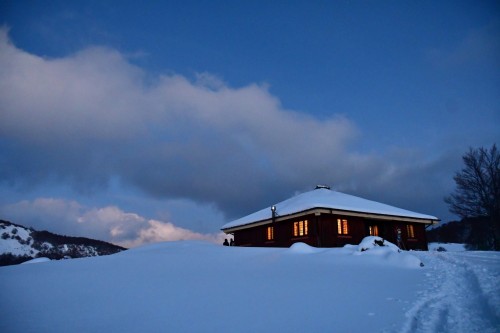 Use or any information about forwarding the request by contacting us.